You are here: Home › Short news › Walrus at North Ronaldsay and Sanday, 2018 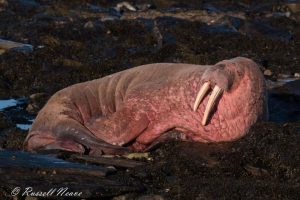 This seldom visitor is of some interest regarding a dead „sea monster“ case:

In September 1894 it is reported that a „Kirkwall correspondent“ told press that „some sea monster has been washed ashore at Traittland, Ronsay. It resembles a walrus, is from 10ft. to 12ft. long, and in a decomposed state. The back of the neck is like that of an elephant; the snout resembles a pig, and on the body is greyish hair“ . Another one said that „it is thicker than a horse, but is probably much wasted by decompositon. The colour is a light grey“ (A sea monster, 1894). The descriptions vary depending on the source, so was also reported that it had „two rows of terrible looking teeth in the upper jaw, a snout like a rhinoceros, and was covered with grey-coloured bristles“ (Death of the sea serpent, 1894).

This is still an open case. Speculations and supposed identifications reach from walrus to basking shark (Heuvelmans, 1968; Vaudrey, 2012).

Death of the sea serpent. (1894, September 19). The Huddersfield Daily Chronicle.