Cape May is a city and also a county in the U.S. state of New Jersey, located at the southern tip of Cape May, a peninsula between Delaware Bay and Atlantic Ocean. In 1921 a “sea monster”, which no one could identify, was reported to have been washed ashore on the beach of the town. Before 2011 the knowledge about this case referred mainly to two authors, the first indicating a prehistoric survivor or unknown creature of the deep sea and the second identifying it as common whale. After the re-discovery of newspaper-articles and a photograph it was possible to uncover the forgotten history of the case as well to present a visually based identification. This rewritten and newly pictured article presents the state of knowledge so far and updates the history of the incident and the cadaver from further newspaper-articles.

Newspapers beginning from September 1921 reported widely about the case, mostly with the same generic text and accompanying photography:

“When this sea monster was cast up by the waves on the New Jersey shore near Cape May, not the oldest sailor on the coast could say what manner of fish it was. They thought it looked like a cross between a whale and a sea cow. It was 76 feet long and had two tusks.” (“What Is the Strange Sea Monster?”, 1921). The Idaho Statesmen, added to this general description that it was partially decomposed, the weight was estimated at 15 tons and one tusk was six feet long (“This weird looking creature”, 1921).

Figure 1. The “tusked sea monster” of Cape May. (“The wonders of animal creation”, 1924. Courtesy of the Mary Evans Picture Library).

However, before 2011 the knowledge about this case referred just to two authors. Frederick Albert Mitchell-Hedges, in context to his assertion that prehistoric survivors and unknown creatures of the deep sea exist, wrote:

“[…] in November 1921, off Cape May, a great beast was washed ashore. This mammal, whose weight was estimated at over 15 tons, which – to give a comparison of size – is almost as large as five fully grown elephants, was visited by many scientists, who were unable to place it, and positively stated that nothing yet known to Science could in any way compare with it.

The photographs which were published in many newspapers showed that this modern leviathan somewhat resembled the elephant – in fact, it could best be described as a sea-elephant, but of huge proportions.” (Mitchell-Hedges, 1923)

A presumption for the mammalian identification of Mitchell-Hedges was that “sea-elephant” could refer literally to a (hitherto unknown and giant) northern elephant seal in the genus Mirounga (Newton, 2012). But figuratively the term was just used as word-combination for a “sea” animal and the comparisons of weight and tusks to an “elephant”. Assuming however, it was truly a mammal, in first case the description of such a heavy, large creature is certainly indicative for a whale. This was the result of Charles Hoy Fort’s research in his book „Lo!” (Mr X, 1998):

“Somebody in Cape May wrote to me that the thing was a highly undesirable carcass of a whale, which had been towed out to sea. Somebody else wrote to me that it was a monster with a tusk twelve feet long, which he had seen. He said that, if I’d like to have it, he’d send me a photograph of the monster. After writing of having seen something with a tusk twelve feet long, he sent me a photograph of something with two tusks, each six feet long. But only one of the seeming tusks is clear in the picture, and it could be, not a tusk, but part of the jaw bone of a whale, propped up tusk-wise.”

Subsequent authors followed Fort’s opinion and narrowed the identity from the descriptions to a baleen whale or Mysticeti (Heuvelmans, 1965; Roesch, 1999; Newton, 2012) while Hemmler (2011), with help of the Cape May County Library, rediscovered several newspaper-accounts and a single photography and identified it as rorqual whale (Balaenopteridae). This discovery also pre-dated the incident from November to September and – following Forts informant that the “carcass of a whale” had been “towed out to sea” – a second storyline clearly naming a whale identity was found. Additional sources in summary give a comprehensive portrait about the fate of this carcass:

Lewes – August 20, 1921
On August 20, 1921, a whale stranded at Lewes in Delaware and was pulled back to sea after three days due to the disgusting odor (“Beach all cluttered up with defunct whale and Cape May is worried some”, 1921). 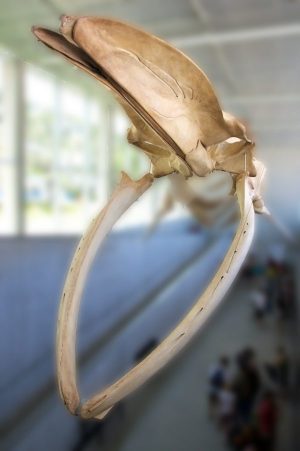 Cape May – September 2/3, 1921
During the night of September 2 to 3, supposedly the same forty-five feet long whale washed up on the beach at Queen Street, Cape May. It was thought that the mammal initially was injured by an aircraft bomb during a maneuver of the Navy in Virginia Capes (what refers collectively to the north of Cape Charles and Cape Henry in the south, forming the entrance to the Chesapeake Bay) and later was killed by shark attacks. A “north-sea whaler” named Captain Olsen believed that the whale probably was attacked by a school of sharks which had eaten small pieces from its sides. One of the larger sharks, he assumed finally attacked the whale from below and disembowelled him. A “crowd of thousands” visited the location to see it, the roads “crowded with vehicles”, as this was said to be the first whale in 20 years at Cape May. After three attempts had failed to lead the carcass to water, it was drawn to sea by ship (“45-ft. whale at Cape May”, 1921; “Whale towed to sea now visits Cape May”, 1921; “Beach all cluttered up with defunct whale and Cape May is worried some”, 1921; “Whale at Cape May”, 1921; “Tow odorous whale away from Cape May”, 1921; “Cape May banishes whale”, 1921; “Bomb killed whale”, 1921).

Rehoboth – September 6, 1921
Despite the attempts to anchor it forty miles off shore, it lastly showed up in Delaware again at Rehoboth on September 6. To end his career as “Flying Dutchmen” the town officials tried to burn it with gasoline and pine knots, what finally failed. So they towed it to sea again and finally blown it up with dynamite (“Cremate whale at Rehoboth”, 1921; “Very dead whale returns to shore”, 1921; “Water Soaked Whale Wouldn’t Burn; May Dynamite Carcass”, 1921).

Following the publishing dates of the collected newspaper-articles, the whale-storyline lasted from September 3 to October 16, 1921. The “sea monster”-storyline began around September 13 and – through the work of Mitchell-Hedges – survived until today. Particularly interesting are the connecting reports between those two versions. After writing about the attempts to tow the whale off shore and how it died, some newspapers further told on September 5:

“Some thought the whale was a sea cow, but on examination it was found the sharks had eaten to the bone in places and two immense bones near the head were mistaken for tusks.” (“Tow odorous whale away from Cape May”, 1921)

While both storylines therefore obviously belong to the same incident, there remains a considerable discrepancy in the given length estimation between “forty-five” and “seventy-six” feet. However, depending on the individual newspaper, the length varied from “forty-five” to “forty” and “sixty-seven” feet in one case. Seemingly failures and transposed figures therefore are the reason why the “sea monster” finally got “seventy-six” feet long.

The rorqual whale identity can be reconstructed through a photography which accompanied several newspapers-articles (Fig. 1), while a second published photo (“What is it?”, 1921; “What Is the Strange Sea Monster?”, 1921;“Cape May’s latest sensation”, 1921) due to its distance shot only adds minor to a specific identification. The overall scene of Figure 1 shows the severely decomposed carcass surrounded from visitors lying on the beach. The picture was taken in front and slightly from the left side of the carcass, hiding most of its posterior parts. Due to the angle and the state of decomposition none of the four flippers and fins (pectoral flippers, dorsal fin and tail-fluke) can be acknowledged.

Head and rostrum
The head of the Cape May carcass is triangular, flattened and elongated, corresponding to the generally streamlined body of Balaenopteridae in general. Common in all rorquals is a single median ridge, running from the tip to the two blowholes. The blowholes themselves can’t be seen directly, but their presence is indicated from the raise of the splashbreaker. The baleen, keratinous plates used for filter-feeding, in the upper jaw is not acknowledgeable.

Mandible
The mandible in mammals consists of two halves, joining in the mandibular symphysis which is of varying length and strength. In humans for example the mandible-halves form a fused single bone while in Mysticeti the lower jawbone-halves became unfused, outwardly curved and extremely elongated (Fig. 2). Anteriorly, where both mandibles are connected, the mandibular symphysis is a flexible pad of fibrous cartilage which also includes a special sensory organ used for lunge feeding. Therefore more fragile to decomposition and impact incidents like ship strikes for example, the separated mandibular arches of a washed up Mysticeti can leave the impression of protruding tusks similar to an elephants. This resemblance and its use in description of “sea monster” carcasses is a tendency and indicative help for identification (Roesch, 2001). Both lower jawbone-halves of the Cape May carcass are separated and exposed from tissue and skin. The left „tusk“ on the right side of the photo is clearly visible (seemingly just its tip is buried in sand and water), while the right halve (below the observing persons) only partially was photographed. The second photo shows that this mandible-halve was twisted to 180 degree. 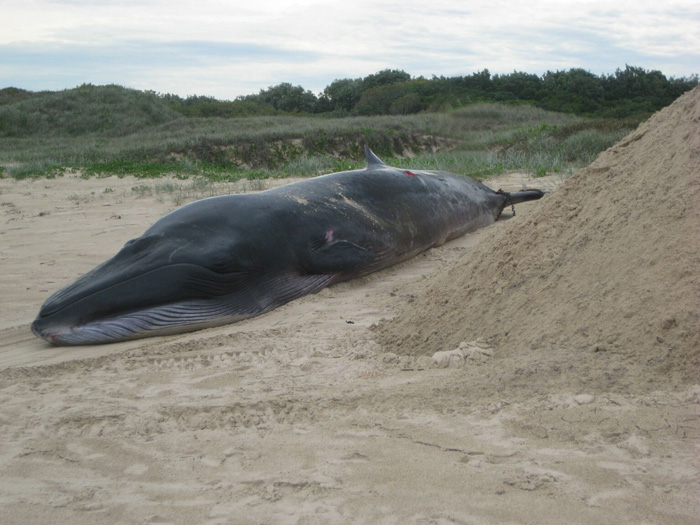 Furrows
Distinct feature of balenopterids are dorsal longitudal folds of skin reaching from the tip of the rostrum to nearly the mid-abdomen in some species. These throat plates can expand impressively to a throat poach through acceleration- and water-produced pressure, what increases the possible volume of prey-laden water, which then is filtered through the baleen (lunge feeding). The carcass, under the left jawbone-halve, shows those characteristic skin furrows of rorqual whales.

Thanks to Linda Melroy from Reference Department at Cape May County Library for providing several newspaper-articles, Lucinda Moore of the Mary Evans Picture Library for license of The Sphere photograph, Lawrence of NSW National Parks and Wildlife Service for permission to adapt the Bryde’s whale picture, Markus Bühler for the “peer-review”, Claire Jaycock for lecturing the first English version and Ulrich Magin for information about Fort and the fate of his archives.

Beach all cluttered up with defunct whale and Cape May is worried some. (1921, September 4). The Gazette Times.

Tow odorous whale away from Cape May. (1921, September 5). The Washington Times.

What Is the Strange Sea Monster? (1921, October 1). Wellington Daily News.

What Is the Strange Sea Monster? (1921, November 26). Warsaw Daily Times and the Northern  Indianian