You are here: Home › Cetorhinus › Sea monster beached at Rockaway, 1951

Rockaway Beach is a city in Tillamook County in the West coast state of Oregon, USA. In July 1951 a “sea monster” washed up here on the shore of the Pacific Ocean, just opposite to Twin Rock. Seemingly only one newspaper-article was published in local press, which provided no positive identification of the creature. The history of this “overlooked” sea monster will be examined from this source as well as from the remembrance of family accounts of Mr William Browne and Mr Don R. Best. The identity of the creature will be explained from a private photography of Mr Best, published online in December 2017. 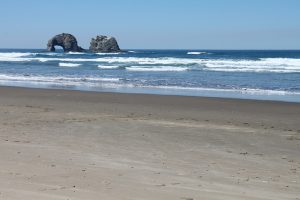 An account about the finding of a „’Sea Monster’ Beached at Rockaway” was published in the regional newspaper „The Oregonian“, while in the second local newspaper, the “Headlight Herald”, no mention of this case was found (Reference Desk Tillamook County Library, personal communication, December 9, 2017):

„An unidentified ‘sea monster’ washed up on the beach at Rockaway Friday evening. Creature is estimated 18 feet in length with wide body, thick hair, tail, fingerlike protrusions which may serve as flippers, long neck and horselike skull. Seagulls are rapidly picking body. Mrs. Howard Brown[e], Portland, stands beside body in this photo taken by her husband“ (“Sea Monster” Beached at Rockaway, 1951).

Most probably through a press-agency, the “sea monster season [which] has opened at Rockaway” got attention also in other states like California or Nebraska: “Residents professed wonderment over an unidentified creature the remains of which have been washed onto the beach at the seashore town. Its length is estimated at 18 feet. The body is wide, with thick hair, a tail and protrusions which may be flippers, a long neck and a horse-like skull.” (Rockaway has its monster again, 1951; Sea monster washes ashore, 1951).

Beside this there is no mention of this case in other relevant “sea monster” literature like for example Dinsdale (1966), Heuvelmans (1968) or Newton (2012).

After an inquiry to the Tillamook County Pioneer Museum a contact was established to Mr William Browne, the son of the eyewitnesses Virginia and Howard Browne:

“My mother and father came across a Dead Sea creature in 1951 on the beach in Rockaway Beach, Oregon USA. They sent a photo to The Oregonian newspaper which was published. They also contacted one of the Universities to have them send someone to investigate it, unfortunately the city dug a deep hole and buried it before they came down. The city didn’t want the publicity. A young lad, Don Best who also lives in Rockaway to this day has a photo of him when he was eight years old standing next to it. He remembers it. […] I remember my parent’s account of the story very vividly. Oh, one more thing. An old Marine Biologist once told me it was a throwback from prehistoric times. She said there are deep underwater caves off Tillamook, Oregon where unknown creatures still thrive. When they die they sometimes wash up.” (William Browne, personal communication, December 27, 2017).

Mrs and Mr Browne kept an original newspaper-clip of the Oregonian’s article. But despite the relatively good (newspaper-) quality of the photo, there are no detailed anatomical parts to acknowledge safely due to the state of decomposition of the creature. Tentatively the long neck, the head or skull, a large bone as well as the elongated body-shape in general can be recognized. The estimated size of 18 feet seems legit in comparison to Mrs Browne. 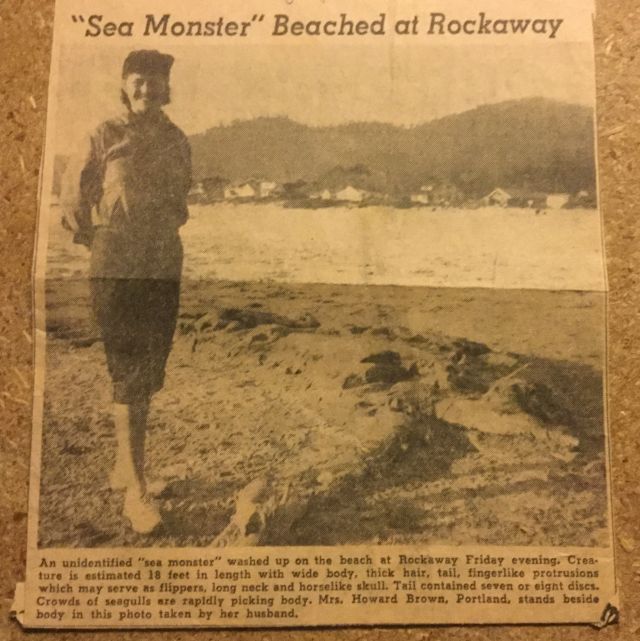 A high quality photograph which was taken from the father of Mr Don Best (personal communication, May 5, 2018) was shared through him at Facebook in the Rockaway Coast Community & Surrounding Areas On The Tillamook Coast-Group (Best, 2017). 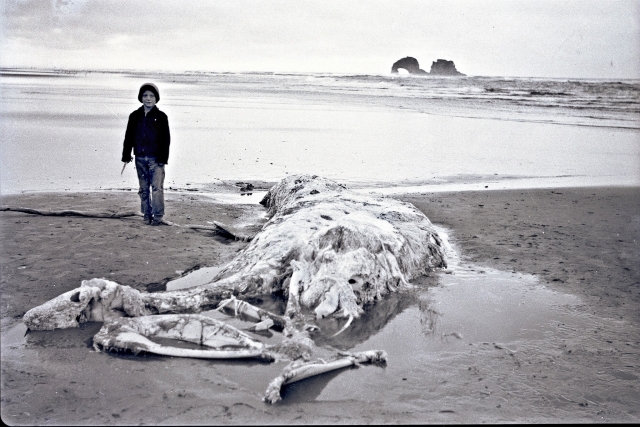 Due to the state of degree of the cadaver, the photo obviously was taken some time before the Browne photograph. The overall scene shows a heavily decomposed animal carcass on Rockaway Beach, near to Saltaire Creek (Best, 2017) with Twin Rocks in the background. The young Don Best stands on a branch beside the carcass. The picture was taken from the anterior end, so the posterior end can’t be acknowledged in detail. The body is positioned in bow-form, partially free from tissue with blank bones visible. Anteriorly there’s a small head, resembling superficially a crocodile’s head, with a long neck followed by a bulky middle part. Posteriorly it tapers to the tail, which for the most part is concealed. On the end of the branch, approximately in the middle of the animal’s dorsal side, there is a triangular form what seems to be the dorsal fin, while no other fins can be clearly noticed. Below neck and head are some – mostly unattached – bones.

The identification as basking shark (Cetorhinus maximus) can be deduced from this photograph. Subsequent anatomical description and terminology of the cartilaginous skeleton is derived from Compagno (1990), Izawa & Shibata (1993), Fairfax (1998), Hamlet (1999), Iuliis & Pulerà (2007) and Klimley (2013) and is visualized in Fig. 4 and 5.

Fig. 4. Wax-model of a basking shark in British Museum with added anatomical terminology used in text (“A Canadian ‘monster’”, 1934. Courtesy of the Mary Evans Picture Library).

Chondrocranium:
The head is largely still covered from tissue and only partially exposes the chondrocranium. Superficially resembling a crocodile’s head in dorsal view, in fact the photo shows the ventral side. The prominent right and the anticipated left hole, situated approximately in the middle of the head, can be identified as ventral openings of the nasal capsules. Posterior the right orbit and its frame of supraorbital crest (dorsal) and suborbital shelf (ventral) are evident.

Splachnocranium:
Most parts of the splachnocranium (consisting of the mandibular arch, hyoid arch, branchial archs and -rays) are vanished, in result just leaving the chondrocranium and the vertebral column up to the pectoral girdle. Below the vertebral column several unattached bones remained, including most prominent three bones of the mandibular arch (Palatoquadrate and Meckel’s cartilage).

Fins, “Hair” etc.:
At the end of the branch the young Don Best stands, the dorsal fin is acknowledgeable. At a heighten part, just behind the location of the pectoral girdle, tentatively the left pectoral fin can be seen – albeit this remains speculative due to the grade of decomposition and quality of the photo. Those circumstances are also the reasons which don’t allow pointing to much more details regarding the rest of the body. Speculation must remain what was described as “thick hair”; probably the resemblance of the ceratotrichia of the fins or broken up tissue in general has led to this comparison. The “fingerlike protrusions which may serve as flippers” point to a structure at or near the fins and so maybe described the radials of the pectoral and/or pelvic fins.

The presented evidence in summary, especially the anatomy in general and the typical unique taphonomical situation as well as the distinctive bones of the mandibular arch, identifies the Rockaway Beach “sea monster” definitively as basking shark (Cetorhinus maximus).

Thanks to William Browne for sharing his knowledge about the case and the collected newspaper-clip, Don Best for his remembrance and the license of the photograph, Susan Luce of Rockaway Branch Library for her help with further contacts, the Reference Desk of the Tillamook County Library for their search through the local newspapers and the unknown acquaintance of William Browne which brought us in communication.

Compagno, L. (1990). Relationships of the megamouth shark, Megachasma pelagios (Lamniformes, Megachasmidae), with comments on its feeding habits. In Pratt, H. et al. (Ed.) Elasmobranchs as living resources: advances in the biology, ecology, systematics and the status of the fishery. NOAA Technical Report NMFS 90.